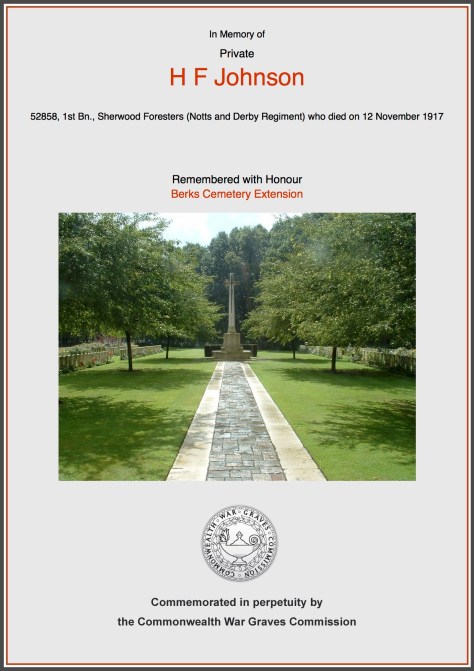 H F Johnson: 1st Battalion, The Sherwood Foresters (Nottinghamshire and Derbyshire Regiment)were in Bombay, India when war broke out in August 1914. They returned to England, landing at Plymouth on the 2nd of October 1914 and joined 24th Brigade, 8th Division at Hursley Park, Winchester. They proceeded to France, landing at Le Havre on the 5th of November a much needed reinforcement to the BEF and remained on the Western Front throughout the war. In 1915 they were in action at The Battle of Neuve Chapelle, The Battle of Aubers and The action of Bois Grenier. On the 18th of October 1915 24th Brigade transferred to 23rd Division to instruct the inexperienced troops. In March 1916 23rd Division took over the front line between Boyau de l’Ersatz and the Souchez River in the Carency sector from the French 17th Division, an area exposed to heavy shelling. In mid April they withdrew to Bruay returning to the Carency sector in mid May just before the German attack on Vimy Ridge, in the sector to their right. On the 15th of June 1916 24th Brigade returned to 8th Division. In 1916 They were in action at the Battle of The Somme. In 1917 they fought in The German retreat to the Hindenburg Line and then moved to Flanders and were in action in The Battle of Pilkem and The Battle of Langemarck. – See more at: http://www.wartimememoriesproject.com/greatwar/allied/sherwoodforesters1-gw.php#sthash.Frz5vpfb.dpuf

1903:  Henry married Florence in Whitby, Yorkshire.
1911 Census: Henry & his family are living in Buxton, Henry is working as a Porter at St. Annes Hotel.

1911 Census: Henry’s wife Florence and children Bessie & Hilda are living at 81 Queens Road the home of his father.
Berks Cemetery Extension (Plot 111 A 19).