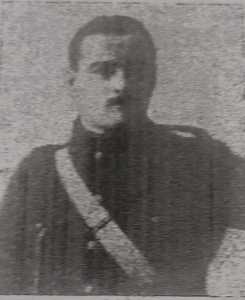 Congratulations to Lieut Dennis R Mullan, who has been Gazetted to the 6th Sherwood Foresters. He was nominated to this regiment last Autumn. The photograph shows him in the uniform of The Artists’ Rifles O.T.C, in which after training for 7 months he successfully passed his final course in the Officer Cadet Unit attached to that Corps. Born in 1894 he is the eldest son of Mr T F Mullan, of Londonderry. and nephew of the Misses Nicholson  of Clifton Bank, Fairfield, and also of the late Major Nicholson of Beech Hill, Londonderry. He was educated by the Rev. C Denman Canterbury, Army and Navy Coach, of Farley, North Staffs. For the last few days he has been on leave pending Gazette, and his numerous friends were pleased to him amongst them again. He has been the recipient of many congratulations upon his promotion from  friends in the Fairfield and Buxton District. He joined his regiment on Monday and the best wishes for good luck went with him.

From the Buxton Advertiser.

Dennis was born in J/F/M Qtr 1895 in Londonderry, in 1901 Dennis aged 6yrs  was living with his Aunt Louisa Nicholson along with brother Maurice boarding with Mr & Mrs Hodkinson in Fairfield.