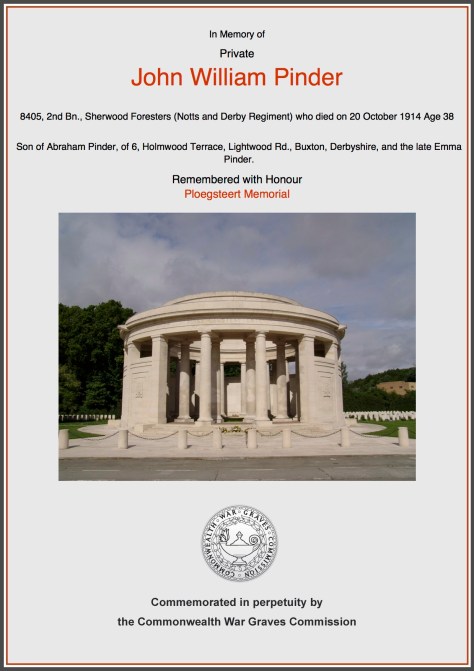 John  was born  on the 27th December 1880 in Fairfield at Roak Villas, he was the first child born to Abraham & Emma Pinder. John William was christened at St Peters Church on 26th April 1881. His birth is registered J/F/M Qtr 1881 Vol 7b Page 789 and the School records his birth wrongly as 27th February 1881. John started at North Road School on 1st April 1889 he left for work on 27th April 1894. John had 5 younger siblings Sarah, Ann, Edward, Harriett and Dorothy.
1891 Census: Living with parents at 2 Rock Villas, Fairfield at School.
1901 Census: Aged 20yrs. Living at 167 Pond Street, Sheffield as a lodger. Occupation General Labourer.
1902: Originally John enlisted on 11th August 1902 into the ‘Derbyshire Regiment’ before enlisting John had been a volunteer in the 2nd Volunteer ‘Sherwood Forresters’ On the 7th December 1903 John received his first overseas posting, to Hong Kong, where he served exactly a year, before moving to British territories located in South-east Asia, which included Singapore, Malacca and Penang. John returned to England on the 4th September 1905. On the 5th September 1905, having completed his three years Active Service, John was placed in the Auxiliary Reserves, he could be called upon in the event of general mobilisation. Pay was 3s 6d per week. He had to attend twelve training days per year. As John’s 12yrs with the Army was about to end John was transferred from the Section B to the Section D Reserves, he was then transferred from the reserves and began his WW1 Service.
1911 Census: John  now aged 30 was living at 206 Heaton Lane, Stockport with Mother Emma, sisters Dorothy, Mary & brother Robert. John’s occupation is a Coal Carter. In 1911 Census Abraham John’s father (surname Pinter on  Census) was lodging at 17 Fairfield Road, Buxton.

John is remembered on the Ploegsteert Memorial, Panel 7, his address was given on the CWWG Certificate as 17 Fairfield Road where his father Abraham was lodging in the 1911 Census. On the day John died his Battalion 2nd Sherwood Foresters lost 3 Officers with a further 3 wounded a further 10 were captured and of the serving men 710 were killed wounded or captured during the push across the River Lys near Lille.