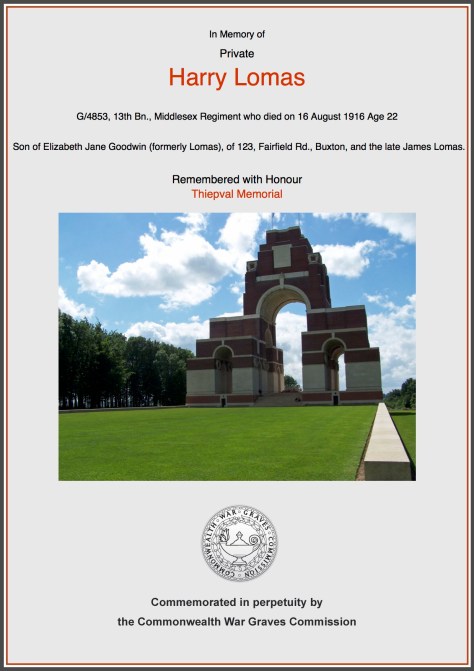 Harry Lomas: The 13th (Service) Battalion, Middlesex Regiment (Duke of Cambridge’s Own) was raised at Mill Hill in September 1914 as part of Kitchener’s Third New Army and joined 73rd Brigade, 24th Division. They trained on the South Downs, sepnding the winter billets in Hove. They moved to Shoreham in May then to Pirbright in June for final training. They proceeded to France on the 2nd of September 1915, landing at Boulogne. The Division concentrated in the area between Etaples and St Pol on 4 September and a few days later marched across France into the reserve for the British assault at Loos, going into action on the 26th of September and suffering heavy losses. In 1916 they suffered in the German gas attack at Wulverghem and then moved to The Somme seeing action in The Battle of Delville Wood and The Battle of Guillemont – See more at: http://www.wartimememoriesproject.com/greatwar/allied/middlesexregiment13-gw.php#sthash.VkPPpCRN.dpuf

Harry’s name is on the Memorial.

Harry’s WW1 Medal Card show that left for France on 31st August 1915 nearly a year before he was killed.

Harry’s Step-father George also died during the WW1, George was a Sapper in the Royal Engineers, he died on 25th March 1917 at home & is included on this website.