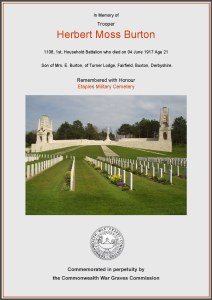 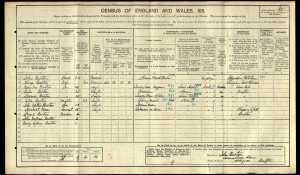 Working as a Servant/Farm Labourer for John & Eliza Burton.

Herbert had either been adopted by the Burton’s or was just called Herbert Moss Burton as that is the name on his WW1 Memorial where it say’s Mrs E Burton is his Mother.

Prior to the War Herbert must have started work at BLI Quarry as his name is on their Memorial which is now situated in the main reception at Tunstead Quarry.
Military: Former service in Royal Horse Guards No.1972.
Grave: Etaples Military Cemetery XXV. G. 16A