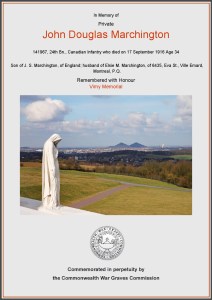 1901 Census: The remaining family are now back in Buxton at 59 Spring Gardens.  I have been unable to find John on either the 1891 or 1901 Census, it is possible that John was serving in the military when the 1901 Census was taken as on his enlistment into the Canadian Army John said he had 3 yrs prior Military Service possibly during the 2nd Boer War.

1906: 12th June, John Sailed to Quebec on board the Lake Champlain.

1911: John married Elsie Mildred Hawe in Wentworth, Ontario, Canada he was working as a Carpenter & Joiner.