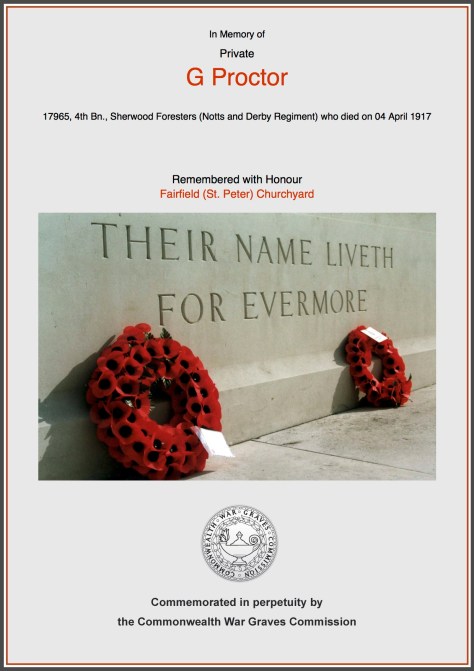 George Proctor: George was born on 24th May 1884 his birth was registered as George Hyde. Georges mother Sarah Ann Hyde was the daughter of Hannah Hyde nee Proctor.

1891 Census: Living on Fairfield Road aged 7yrs and is listed as the Son of Blacksmiths Francis Proctors cousin Sarah Anne Hyde along with his older sister Edith, Edith was born on 29th November 1878 and started North Road School 4th April 1889. George started North Road School on 1st February 1892. Both had the surname  Proctor and their fathers name is given as Frank of Fairfield Road.
1901 Census: Living at Alma Place with Francis Proctor now listed as an Uncle who is a Blacksmith. Georges occupation is a Wheelwright.

1911 Census: I have been unable to find George on the census however records for his mother, show that she was lodging at 5 Heaton Place, Fairfield, employed as a ‘Carpet Maker’ there is now a younger brother, Richard, born in 1898. Sister Edith is working as a Servant.