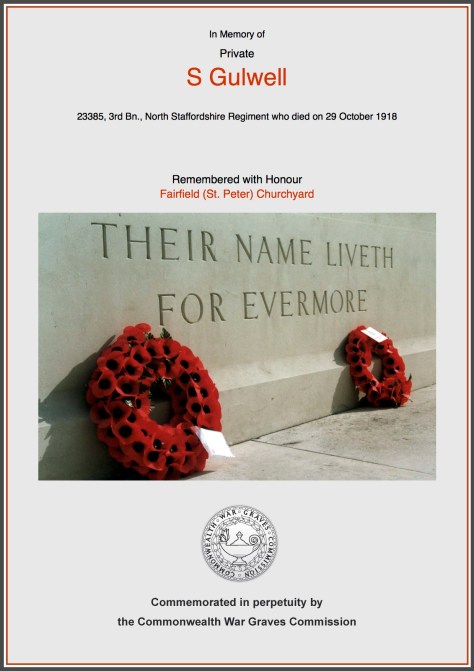 1916: 29th April Enlisted. Address 31 Windsor Road Fairfield Occupation Driver for Ormes (a local transport company).1916: 1st May Posted – 22nd August discharged on Medical grounds. Stanley was obviously not a well man and frequently passed out whilst on parade, he was firstly admitted to Foresthall Hospital in Glasgow.

At St Peters Churchyard on Friday last another Fairfield lad was interred Pte Stanley Gulwell of 31 Windsor road, Fairfield. This young man has served for a year in His Majesty’s Army Forces and was discharged as unfit. Falling into increased decrepitude he has gradually wasted away and the end came in hospital last week. Mrs Gulwell, Mr W Goodwin and other sorrowing friends attended the funeral, which was taken by the Rev. E L Harkness M. A. (Vicar) Mr F W Booth was the undertaker.