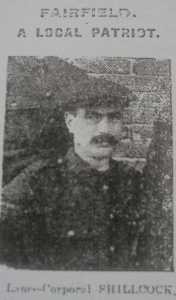 Lance-Corporal Shillcock,of Fairfield, with the Sherwood foresters. He is a prisoner of war in Germany, and a son of Mr. E Shillcock, 9 Heaton Place, Fairfield.Later report:Pte Shilcock – Return of a prisoner
Pte Shillcock of Fairfield, has returned to his home, much to the satisfaction of his relatives.  (Report from Buxton Advertiser)

Harry was born in Calton near Ashbourne on 2nd February 1888 the son of Thomas (Farmer) & Mary Jane Shillcock.

1904: Harry enlisted into the Army Pt 9211 Notts & Derby Regiment on the 5th March aged 18yrs 1mth, he was 5’7″ tall with Blue eyes & Brown hair. From 15th February 1907 – 21st February harry served in India. He was promoted to Lance Corporal 22nd June 1909 but on the 13th October 1909 at his own request he reverted to being a Private. Harry was transferred to the Reserves 2nd Class on 4th December 1909. Harry then returned to Fairfield firstly to his parents at Frome Farm, working as a Labourer. On 6th November 1913 Harry married Eliza Morris @ St Peters Church, the couple moved to 9 Heaton Place, on the 12th June 1914 the couple had a son Harry Jnr. Harry resumed his Military duties on 13th August 1914 joining 3rd Battalion Notts & Derby Regiment. He was injured by shrapnel in his back and was taken prisoner on 20th October 1914, he spent the next 4 years as a prisoner being released on 13th December 1918 & being repatriated home the following day. Altogether including his time in the Reserves Harry served a total of 15years 14days in the Army.

Harry died in the June Qtr 1972, his death was registered at Chapel-en-le-Frith.