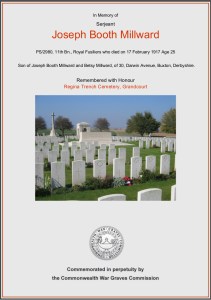 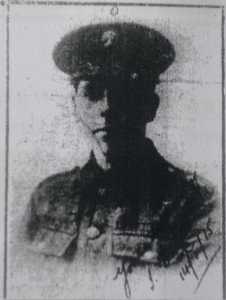 Joseph B Millward was born in 1892, he had a younger brother Arthur Howard Millward, their mother was Betsy in 1901 the boy’s and their Mother were living at 20 Spring Gardens. The 1911 census  has Joseph still living at home now 130 Darwin Ave, he was working as a Bank Clerk.

22nd Feb 1917
Dear Mrs Millward. – It is with profound regret that I have to inform you that your gallant son was killed in action on the 17th of this month. We shall miss him terribly out here. He was such a brave fellow who could always be trusted to do his duty fearlessly and well. I relied on him implicitly in a tight corner and indeed at all times. I hope you will feel it a source of pride and consolation in your bereavement to know that he did not lose his life to no purpose, but at the furthest point forward of a successful assault – an assault which has had very far-reaching in making the enemy retreat. In this attack every officer in the company became a casualty and it was very largely owing to the leadership displayed by your son that the thrust was able to be pushed home into the hostile trenches. He had been doing his work so well that I had promised to recommend him for some leave, and had the military situation permitted, he would have had the opportunity of getting home. It is very sad that this cannot now happen, but at any rate his days recently were brightened by the hope of getting home and by knowing that his officers thought very highly indeed of him. We shall miss him terribly in the company, and on behalf of his friends and the men under my command with whom he served and by whom he was deservedly beloved, I send you my deepest sympathy.
N. B. Mitchell Capt, Comdg. “C” Coy, 11th R.F.

Joseph left everything to his widowed mother.