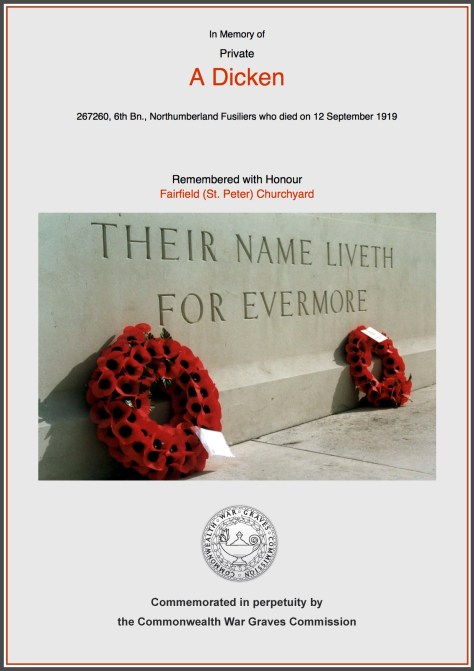 1919: Arthur married Ethel Coates in March in the September they had a son Arthur Jnr unfortunately the baby died not long after he was born. When Arthur Snr died, it was reported in the local paper that Ethel had lost both her husband & baby within months.

1919: Death living at 1 West View off Queens Road, Fairfield.
Occupation at time of death was a Crusher Feeder as after his return from the War he had returned to work in the Quarry.
Probate to wife Ethel £79

Report on the Funeral & Inquest in the Buxton Advertiser September 1919.

We reported last week on the sudden decease of this young man, whose untimely passing at the early age of 28yrs is lamented by all who knew him in the district. He was laid to rest at Fairfield Churchyard in the same grave where his beloved brother was interred. The cortege left the home at 1, West View off Queens Road, Fairfield on Monday, and en route much sympathy was envinced by neighbours who had drawn their blinds out of respect for one highly thought of.  Reverend E L Harkness M A Vicar, said the Burial Office.  The service was of a simple but impressive character, and was largely attended. With the bereaved widow, much sympathy will be offered.  Mr J Wood was the undertaker.

Mr Sydney Taylor, Coroner for the High Peak Hundred, held an inquiry on Saturday afternoon into the circumstances surrounding the death of Mr Arthur Dicken, of 1 West View, off Queens Road, Fairfield, at that address. Mr A Brown Solicitor represented the Buxton Lime Firms Co Ltd, with whom the deceased was employed.

Mrs Dicken identified the body as that of her husband, aged 26yrs a crusher feeder for the Buxton Lime Firms. She said that her husband had been in the Army, he had been out of the Army for 2 years, and had worked up until then, but had been attended by Dr Richardson about 4 months since, as he complained about his head hurting at the back. He also said he felt weak. On going to work the previous day he seemed as well as usual. George Wm Mycock, of Devonshire Cottages, Ashwood Dale, a labourer said he worked at Cowdale Quarry. About 10.30 on Friday morning he found deceased on top of the crusher shoot laying on the flat platform. He was alive. Witness shouted , and Armitt came. Deceased had been filling a stone wagon-lifting stone from the ground to the wagon-with lumps of from 40lbs to 50lbs. Joe Armitt of Cross Street, Fairfield stated that he went to the top of the crusher when the witness called. Deceased was alive about half an hour, but was not able to speak. There was a mark on the temple. Dr Hendry in his evidence said he had never attended the deceased, but Dr Richardson had left certain records. He made a post mortem examination. The bruise above the eye was superficial, but there were signs of of Chronic kidney disease and associated with this condition, the heart was enlarged to almost twice the normal size.. There was a thick layer of fat over the organ and degeneration of the heart muscle. The other organs were healthy. Death was due to sudden failure of the heart action consequent upon the disease of the kidneys. He did not think the mans work affected the issue, but it was possible that hard manual labour might accelerate it. The coroner said that he thought at first that he might deal with the case as purely one of natural causes, but owing to the Doctors last statement he decided to adjourn it for the attendance of the Inspector of mines, until Friday next. The adjourned inquest was held on Friday afternoon, this being attended by Mr Hartley, Inspector of Mines. The evidence previously given was repeated, but no questions were asked, and the Coroner recorded a verdict to the effect that death was due to a sudden failure of the heart owing to kidney disease.