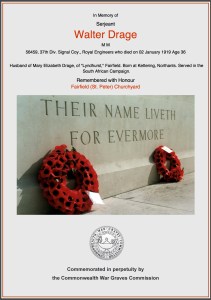 Walter Drage: 37th Divisional Signals Company, The Royal Engineers served with 37th Division. The Division was formed in early 1915, in April the Division concentrated at Cholderton on Salisbury Plain and proceeded to France in July, concentrating near Tilques. They went into action in The Battle of the Ancre. In 1917 they fought in The First Battle of the Scarpe, including the capture of Monchy-le-Preux, The Second Battle of the Scarpe and The Battle of Arleux. They were in action during the Third Battles of Ypres. In 1918 They were in action on The Somme, in the Battles of the Hindenburg Line and the Final Advance in Picardy. At the Armistice the Division was in the area of Le Quesnoy. Demobilisation began on Boxing Day and was complete by 25 March 1919. – See more at: http://www.wartimememoriesproject.com/greatwar/allied/royalengineers37divsigcoy-gw.php#sthash.SXHNAHgH.dpuf

Walter was awarded the Military Medal

1918 Discharged: 20th February 1918, he was sent to the Nottingham War Hospital Mapperley Hill. Walter was suffering from what now would be described as Shell Shock or Post Traumatic Stress Disorder.

Walter Drage – Khaki Wedding as reported in the Buxton Advertiser (researched 2014)
A Wedding of quiet character was solemnised at St. Peter’s Church, Fairfield on Monday. The bride was Miss Mary Elizabeth Taylor, daughter of the late Mr Robert Taylor and Mrs Taylor of Lyndhurst, Fairfield, and the bridegroom Sergeant Walter Drage , of the Royal Engineers, at one time stationed in this town, son of Mr John Drage. Miss Emily Taylor selected as bridesmaid, and Mr Ralph Drage (late of the Army) was best man. Mr John Taylor gave the bride away. Reverend E L Harkness, Vicar and surrogate, officiated, and Mr S Boundy (verger) assisted. As the happy pair left the church they were showered with rice. The bride groom who has seen active service, has been located at Kettering Military Hospital. It is hoped he will quite soon recover. Inhabitants will wish the bridal pair much happiness.

Walter had only married in 1918 and within a year his death was being reported.
1919: Death – Probate address 15 Fuller Street, Kettering. Occupation Sergeant Royal Engineers. £353 17s 3d to wife Mary Elizabeth Drage.

Sergeant Walter Drage Funeral as reported in the Buxton Advertiser
The funeral of Sergeant Drage, of the Royal Engineers, who died at the Military Hospital, Nottingham, took place at St. Peter’s Church on Monday. Sergeant Drage was in Buxton with the first contingent of Royal Engineers and was only married last July at Fairfield. The greatest sympathy is felt for his young widow. The officiating Priest was the Vicar, the Reverend K. Law Harkness, MA., and the mourners were: Mrs Drage (widow), Mrs Drage (mother), Sapper H Drage (brother), Mr and Mrs Drage (brother and sister-in-law), Mrs Stockledge and Mrs Smith (sisters), Mr Crisp (brother-in-law), Mrs Taylor (mother-in-law), Miss Taylor (sister-in-law), Miss Hughes (cousin), and Capt. G. W. Hardy. The floral tributes were as follows: Cross In Loving Memory of my dear Husband; Wreath To our dear brother, In loving sympathy to the best of brothers from Mother and sisters Lily and Ada; Wreath to our dear brother, In loving memory, from Sapper Horace, Lot and children; Wreath, In loving memory, from his loving brother and sister, Sergeant Bertie and Margaret; Wreath In loving memory of our dear brother, from Ethel, William, and children; Wreath, 2With deepest sympathy,” from his loving brother and sister, Ralph and Beatrice; Wreath, In loving memory from Mother, Robert, Emily and Florrie; Spray, from Capt. G. W. Hardy, By the kindness of Col. Hanson, the N.C.O and firing party, and the Bugler who played the Last Post were provided. The funeral arrangements were carried out by Messrs. F. W. Booth, undertakers, Lightwood Road.