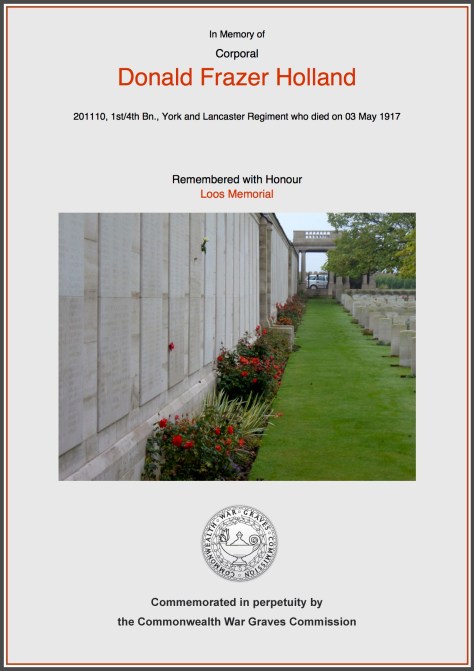 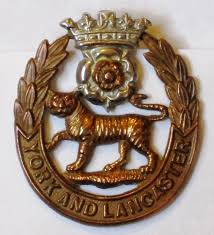 Donald Frazer Holland: The 1/4th (Hallamshire) Battalion, York & Lancaster Regiment was a Territorial unit based in Sheffield serving with the 3rd West Riding Brigade, West Riding Division. When war broke out in August 1914, the units of the Division had just departed for their annual summer camp, they were at once recalled to their home base and mobilised for war service, moving to Doncaster. In November they moved to Gainsborough and in in February 1915 to York to prepare for service overseas, those men who had not volunteered for Imperial Service transferred tp the newly formed 2/4th Battalion. They proceeded to France on the 14th of April 1915, sailing from Folkestone to Boulogne. The Division concentrated in the area around Estaires. On the 15th of May the formation was renamed 148th Brigade, 49th (West Riding) Division. Their first action was in the The Battle of Aubers Ridge in May 1915. In 1916 They were in action in the Battles of the Somme. In 1917 they were involved in the Operations on the Flanders Coast and the The Battle of Poelcapelle during the Third Battle of Ypres. – See more at: http://www.wartimememoriesproject.com/greatwar/allied/yorklancs4.php#sthash.7CI7Qtb8.dpuf

1894 born in Hadfield, Derbyshire (O/N/D vol 7b, page 817) 1901 Census living at 48 The Avenue, Hadfield, Glossop aged 6yrs. 1914 Attestation, living at 178 Worksop Road, Handsworth, Sheffield with Mother Lizzie who is buried at St Peters Fairfield, Donald is remembered on the Grave.