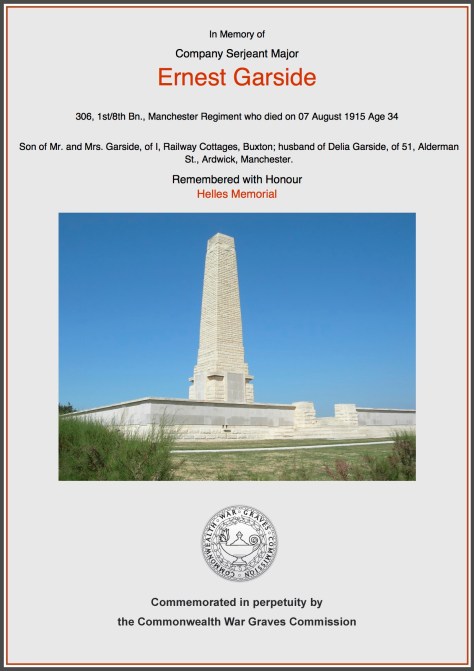 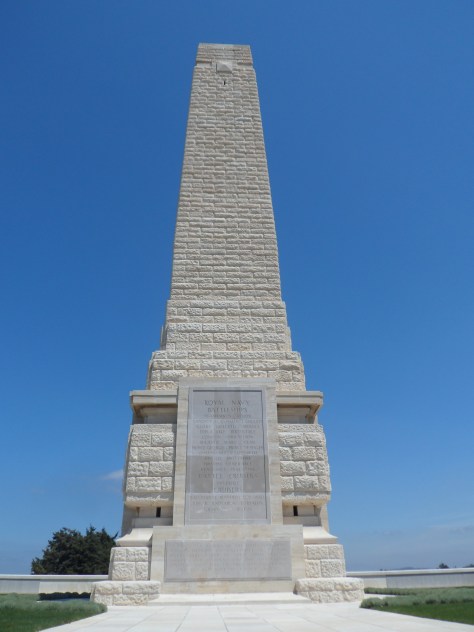 Ernest Brownridge Garside: The 1/8th (Ardwick) Battalion, Manchester were a Territorial unit, when war broke out in August 1914 they were based in Ardwick as part of the Manchester Brigade, East Lancashire Division. They were mobilized and moved to Rochdale to prepare for service overseas. They proceeded to Egypt arriving at Alexandria on the 25th of Sepetmber to defend the Suez Canal from the Turkishh forces in Palestine. They were in action in the Turkish attack on the Suez Canal on the 3rd of February 1915. In the first week of May the division embraked from Alexandria, landing at Cape Helles, Gallipoli, where they saw action in the attempts to capture the heights of Krihia and the Battle of Krithia Vineyard which was a diversionary attack for the British Landing at Sulva Bay. – See more at: http://www.wartimememoriesproject.com/greatwar/allied/manchesterregiment8-gw.php#sthash.6C4JJyfy.dpuf

1899: Ernest attested into the Liverpool Regiment on 9th December his address was 1 L N W Cottages, Buxton, he was aged 18yrs 10mths.  Over the following couple of years Ernest was rapidly promoted making, L/Cpl 15th Feb 1900, Corporal 15th Sept 1900, L/Sgt 26th Dec 1901, Sergeant 1st Feb 1902.
1901 Census: Living in Ardwick, Manchester as a Boarderwith the Livesley family at 59 Tipping Street, Ardwick, Ernest was working as a Cabinet Maker. Ernest was obviously still engaged in the Army as well at this time as his promotion to Sergeant was in 1902, he was discharged finally on 30th October 1902.
1903: Marriage to Delia Lynch on 29th July @ St James, Collyhurst, Lancashire, the couple lived at 51 Alderman Street, Ardwick. Ernest enlisted into the Volunteer Force & during the Boer War he was in the Queen’s Own Regiment.
1911 Census: Living at 17 Mellor St. Ardwick, Manchester working as Shop Fruit & Showcase Maker. Ernest is now living with Daisy who is the mother of his 2 young daughters, Dorothy born 23rd September 1908, baptised at St Lukes, Chorlton-cum-Medlock & Lottie Sabina born Jan 1911, baptised 25th January 1911 at St Silas, Ardwick. Delia is living with the 2 sons of their marriage Ernest jnr born 1904 & Robert born 1906 at 51 Alderman Street, Ardwick.

1913: Ernest & Daisy had another daughter Elsie Edna, baptised 19th November 1913 at St Silas, Ardwick the couple were then living at 6 Crane Street, Ardwick.

The probate shows that at the time of his death Ernest was living at 6 Crane Street, the address he shared with Daisy and his 3 daughters. The estate went to Delia his wife and mother of his 2 sons.