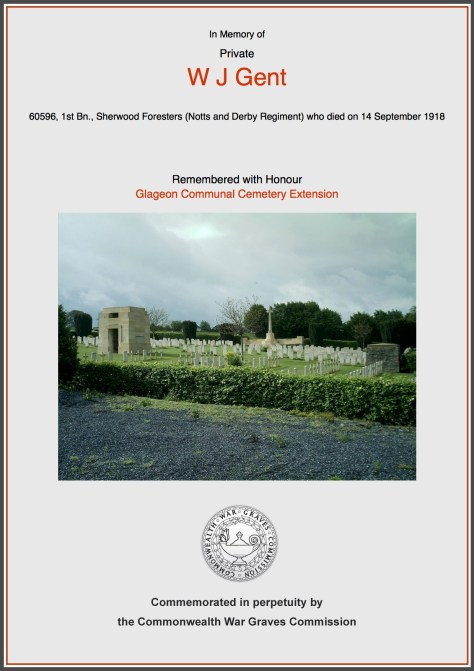 W J Gent: 1st Battalion, The Sherwood Foresters (Nottinghamshire and Derbyshire Regiment)were in Bombay, India when war broke out in August 1914. They returned to England, landing at Plymouth on the 2nd of October 1914 and joined 24th Brigade, 8th Division at Hursley Park, Winchester. They proceeded to France, landing at Le Havre on the 5th of November a much needed reinforcement to the BEF and remained on the Western Front throughout the war. In 1915 they were in action at The Battle of Neuve Chapelle, The Battle of Aubers and The action of Bois Grenier. On the 18th of October 1915 24th Brigade transferred to 23rd Division to instruct the inexperienced troops. In March 1916 23rd Division took over the front line between Boyau de l’Ersatz and the Souchez River in the Carency sector from the French 17th Division, an area exposed to heavy shelling. In mid April they withdrew to Bruay returning to the Carency sector in mid May just before the German attack on Vimy Ridge, in the sector to their right. On the 15th of June 1916 24th Brigade returned to 8th Division. In 1916 They were in action at the Battle of The Somme. In 1917 they fought in The German retreat to the Hindenburg Line and then moved to Flanders and were in action in The Battle of Pilkem and The Battle of Langemarck. In 1918 they saw action during The Battle of St Quentin, The actions at the Somme crossings, The Battle of Rosieres, The actions of Villers-Bretonneux, The Battle of the Aisne, The Battle of the Scarpe and The Final Advance in Artois including the capture of Douai – See more at: http://www.wartimememoriesproject.com/greatwar/allied/sherwoodforesters1-gw.php#sthash.UIiI1vzm.dpuf

William enlisted in August 1916 into the 1st Battalion Notts & Derby. In February 1917 he went to France, in May 1918 William was reported missing following a battle at Guyrencourt but later reported as having been taken as a POW, he was held by the Germans for 4 months before his death.

Report from Buxton Advertiser on Williams death. It is with much regret that we record the death of Private William James Gent of 68 Kings Road, whose wife has now received official information that he died at Trelon in September 1918. Deceased who was 44 years of age, joined the forces in August of 1916, and went to France in February of the following year, being in the Sherwood Foresters. He had been taken prisoner, and his death took place in hospital. deep sympathy will be expressed with the bereaved wife and children.