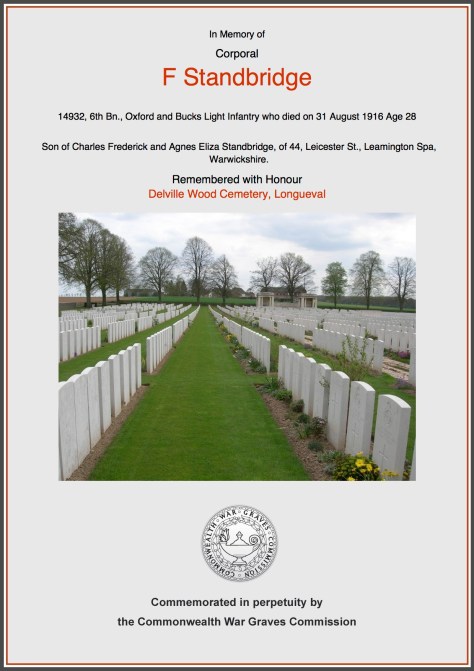 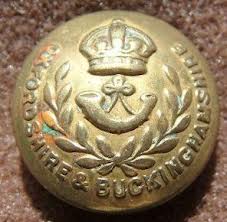 Frank’s name is on the Memorial.

1901: Frank aged 11yrs is liisted as being in The Royal Orphanage in Wolverhampton. Mother Agnes & Sister Daisy Muriel are lodging at 5 William Street in Leamington Priors, Agnes is working as a Dressmaker.
1911 Census: Frank is living @ 23 Park Road, Buxton as a boarder, the home of Mrs Elizabeth Linaker.
Occupation: Groom, Frank also worked as a Reporter for the Buxton Advertiser.

The photograph was taken at Cowshott Camp, Woking Frank is kneeling down on the right. Frank went to France in July 1915 as shown on his Medal Card.

Frank Standbridge: 6th (Service) Battalion, Oxfordshire and Buckinghamshire Light Infantry was raised at Oxford in September 1914 as part of Kitchener’s Second New Army and joined 60th Brigade, 20th (Light) Division. After initial training the in the Oxford area with little equipment, they moved to Deepcut In February 1915 they moved to Godalming and then to Salisbury Plain in April for final training and proceeded to France on the 22nd of July, landing at Bologne and the division concentrating in the Saint-Omer area. They moved to the Fleurbaix area for trench familiarisation. In 1916 they were in action at the The Battle of Mount Sorrel, in which the Division, along with the Canadians, recaptured the heights. They were in action on the Somme in The Battle of Delville Wood, The Battle of Guillemont, The Battle of Flers-Courcelette, The Battle of Morval and The Battle of Le Transloy. – See more at: http://www.wartimememoriesproject.com/greatwar/allied/oxfordbuckslightinf6-gw.php#sthash.D6QXXPBQ.dpuf
WW1: Service Corporal Oxford & Bucks Regiment

Corporal Frank Standbridge:  Obituary from The Buxton Advertiser 9th September 1916
It is with sincere regret we have this week to announce the death in action of Corporal Frank Standbridge, who for several years past had been a member of the reporting staff of the “High Peak News” and “Buxton Advertiser.” He was well known and respected in the district which he visited in the performance of his duties. With his aged mother, who resides at Leamington, and his sister, much sympathy is expressed in their sad bereavement. Amongst those by whom the appeal for men in their country’s call was most readily answered was Frank Standbridge, and a very tender chord is touched by the news of his death, received from Coy,-Q,-M,-S, Kennerley, another member of the staff of this journal. The writer well remembers the day on which Standbridge and William Brunt, a fellow-reporter on the “Buxton Herald” went to the recruiting office and did their duty. Poor Brunt’s death, only a few day’s after he had been promoted to commissioned rank is still green in the memory of us all, and now that his bosom friend, in peace and in war, has given his all, the reflection that two such fine young men who had the world before them, and a world of promise, too, have been so ruthlessly laid low, is grievous indeed. Throughout a big portion of the High Peakland, and in Buxton in particular, was Frank Standbridge personally, intimately known. His profession took him into spheres not open to most men. It is no boast to say he was a young man of remarkable energy and one who never knew what is was to have done enough in the interests of the paper on which he was employed. Physically he was splendidly endowed: be it at football, cricket, swimming or running, Frank Standbridge could always hold his own, and oftentimes a bit more. He possessed above the average abilities of the all-round young athlete, and since joining the Army, has given proof of such long distance races especially. It can easily be understood that the traits in his character that showed them-selves naturally in private life would manifest themselves when playing the sterner game of war. All who knew him, in Derbyshire & Warwickshire, will we think agree when it is said that no young man had better qualifications for the making of a good soldier, and that he did his duty fearlessly, conscientiously, faithfully, in no matter what post he filled, will be taken for-granted. The following letter was received on Wednesday from Company-Quarter Master Sergeant W H Kennerley, of ‘A’ Company:- It is with the deepest regret I write this letter. Poor Standbridge died a soldiers death on Thursday afternoon. I have only just had the official intimation. Can you imagine what it is to me to write this, following so closely on Billy Brunt? Standbridge was killed in the first line trench at his gun. I was not with him, being with his Trench Mortor Battery, to whom he had been attached now for some four months. He was buried in a cemetery behind the line. I am not allowed to tell you where but i expect the eyes of the world will be on this place tomorrow. A 9.2 shell dropped right into six of them while attending to their gun, killing five and wounding one. It was a great blow to me when I was told, for we had been through the campaign together since we came out until he went to the trench mortars, and then he was attached to our brigade, so I frequently dropped across him. While he was in my platoon I always found him fearless & brave, always ready for any task put to him. Beloved by the boys, he is indeed a great loss. I can’t tell you what a loss he was to me when he left the platoon for the trench mortars. Never shall I forget him at Loos last September. What I should have done without him I don’t know. And now he has gone to his maker gone where there are no such bloody wars as this. If it is any comfort to those who loved him best, let me say he died a noble death and suffered no pain. He will be sadly missed in this Battalion’s sporting circles, for he was the life and soul of “D” Company in all their sports and always gave a helping hand whenever he was asked. I only wish it was in my power to describe him as a Soldier in more eloquent terms. I can only say, “Old Stan, did his bit, and did it well.” The old boys of his old platoon join me in this simple method of sympathy. Although poor Frank has gone, his name and memory will be honoured by all his old comrades in this Battalion. I wish I could write more, but it is so difficult for me. “Greater love hath no man to give up his life for his friends.” Corporal W. D. Sample has written under the date September 1st to Mrs Boundy, of Queens Road, Fairfield where Corporal Standbridge had apartments when in Buxton as follows:- You will be sorry to hear that Corpl. Standbridge was killed in action yesterday noon. The enclosed letter was found in his pay-book as we were burying him. To you who knew him better than the writer, it will be no greater loss than to us. His cheerful disposition his ready wit, his courage, were an example to everyman in the Battery. He died working in his gun emplacement, and died, I’m sure, as cheerfully as he lived.
The Last Letter:
Corporal Frank Standbridge wrote a letter to Mr & Mrs Boundy of Fairfield Road dated 28th June 1916 in which he thanks them knowing how busy they are for writing to him.