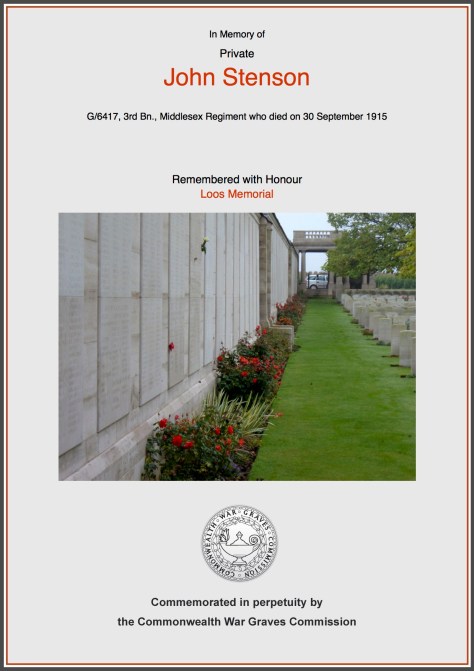 John (Jack) enlisted at sometime during December 1914, following training Jack landed at Le Harve on 2nd may 1915, he arrived with his battalion towards the end of the 2nd Battle of Ypres, the battalion were re-enforcements. Jack was then with the battalion sent to Loos where a fierce battle was fought, Jack had only been there a matter of day’s before he was killed. There are 2 dates given for his death the 29th & 30th of September. 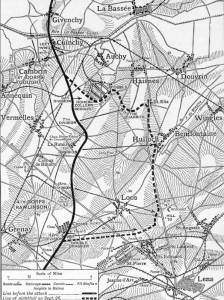 Map showing the Battle of Loos 1915

Served as a Private in the Duke of Cambridge’s Own (Middlesex Regiment) 3rd Battalion. Army service number G/6417. John was involved in one of the most brutal and tragic battles of the war aged just 25yrs. The exact date for John’s death is uncertain, He died either late on the 29th or in the early hours of 30th September.Most of the fighting at Loos, where the land is very flat, was centered on taking Hill 70 which was a German stronghold. Fighting continued throughout the 29th September the battle raged. During the night the enemy attacked causing the loss of a Gun Trench. The Germans also shelled the village from Hill 70 with an 8-inch Gun. Troops in Loos prepared to withdraw, remaining troops consolidated their positions.
Duke of Cambridge 3rd Battalion Middlesex Regiment War Diary report from the National Archives detail events as they happened.
September 28th 1915
At 2am orders received to proceed to British old first line trench ‘Central Bayou’ to a position opposite Hohenzollern redoubt. On arrival there orders received to support the ‘Buffs’ in an attack at once towards the DUMP and clean all trenches & communication trenches on left of DUMP. Bombardment started & ceased at 9.30am. The Buffs advanced in the open & Battalion along SOUTH FACE TRENCH (ref map 36.C.NW) at arrival at point 35 DUMP TRENCH. The bombers attacked along left face of trench. Considerable progress was made when bombs ran out and urgent appeals were made for more. The battalion then began to suffer considerable casualties from a heavy attack with bombs. The narrow trench then became congested with wounded, men of other units who were relieved & on their way out of the trench by the Buffs who had to give away on the right. The CO then gave the order to withdraw slowly, this operation was most difficult the trench being a narrow one and only 7ft deep. We were enfiladed on both sides by MG fire and impossible to show a head above the parapet. About this time the CO (Col. Neale) was killed. The battalion was then withdrawn down the South Face. Orders were received to hold BIG WILLIE. The company was distributed along BIG WILLIE. The Royal Fusiliers were ordered to hold S FACE. During the day the Germans heavily attacked the S FACE but were held by our bombers.
September 29th 1915
S FACE was again heavily attacked by German bombers – about 5am the 1/Y L passed through BIG WILLIE to relieve the 2/Buffs, who were then on our sights holding DUMP TRENCH. The Buffs were withdrawn and took into the space on our left & right of the 3/RF. About 11am the German attack became very severe and our bombers were short of bombs & it was seen that they would have to withdraw again. In consultation with the CO Buffs it was decided that if the S Face had to be evacuated the Buffs would have to withdraw also. The order was then given for our company to remain in BIG WILLIE, one to reinforce the right of RF’s in WEST FACE & two into the communication trench from W FACE to do British Front Line. This was done, later W FACE was taken by Germans & the company re-organised into the old 1 trench where it remained until midnight 30th September / 1st October. (Taken from the War Diaries from National Archives)

Report of Johns death from Buxton Advertiser
Residents of Fairfield heard with much regret that Pte. John Stenson, who lived at Heaton Place, Town End, had been killed in action. This soldier fell in the service of his King & country on the 29th September, and the news was received officially on Thursday evening. Previously, however a friend of his had written conveying the sad news, but how John was killed is unknown. He was laid to rest on 2nd October. Before enlisting this soldier was engaged by the Buxton Lime Firms Company Ltd,  and he was 25yrs of age.  He enlisted in the 3rd Battalion Middlesex Regiment last November. All will unite with us in extending sincerest sympathy to his relatives and friends. 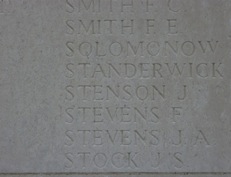 Photo with thanks to Dave Bagshaw

John is remembered on the Buxton Lime Industry Memorial in the main reception at ‘Tunstead’ Quarry as he worked for BLI (that was latter incorporated into ICI) before en-listing into the Middlesex Regiment. His occupation was as a Stone Delver (see below) 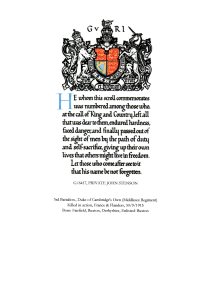 1891 Census: Age 1yr Warslow, Staffordshire (visitor) with his Mother to his Grandparents. The family were living at No 6 Heaton Place, Town End, Fairfield.

1894: John started North Road School on 12th September the family were living at 6 Heaton Place
1901 Census: Living @ 5 Heaton Row (Place) aged 11yrs @ School & a Golf Caddie at Fairfield Golf Course. A lot of the boy’s acted as Caddies during the late 1800’s & early 1900’s in Fairfield some with permission. John now has younger siblings, brother Tom and sisters Sarah & Alice.
1911 Census: Living @ 1 Heaton Place, Fairfield Age 21yrs. All the Stenson boys served during WW1 Peter in the RAMC, Joseph in Sherwood Forresters, Tom in the Sherwood Forresters later transferring to the Machine Gun Corps from which he was honorably medically discharged and receiving the Silver war Badge.

Stone Delver
The quarry would have employed a large number of quarrymen with specific tasks. Delvers, who started the process, were skilled in removing stone from the various beds. Under their direction labourers used picks, wedges and crowbars in the quarry. Large blocks were split using plugs and feathers. A straight line (or race) of 60cm deep holes was drilled into the rock. Feathers are metal flanges which fit into the hole, and then a metal wedge (or plug) was gradually knocked into each hole so that the pairs of feathers were widened by a series of mallet blows. The rock then split along the line of tension. This process is still in use today.

Drilling the holes for the insertion of the Plug & Feathers