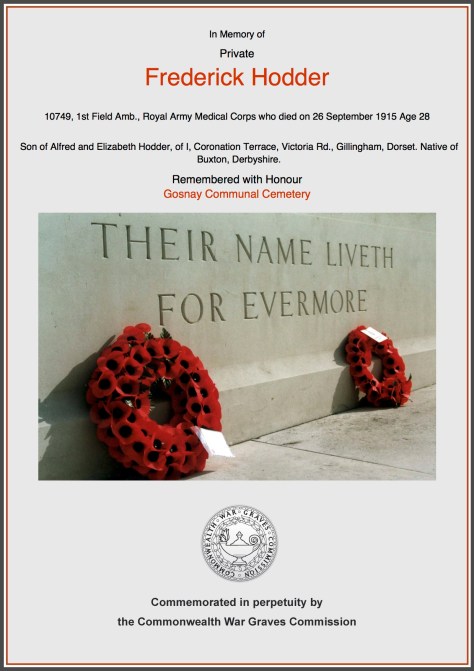 Born: 9th September 1886 in Fairfield to parents Alfred a Coachman & Elizabeth. In 1888 the family were living at 1 Stonebench Cottages.
1891 Census: Living at Alnwick Terrace, Fairfield Road.

There are only 13 CWW Graves at Gosnay of which Fred’s is one.

An Army colleague sent a letter to a friend of Fred’s living in New Mills. It read: ” It was in the attack on Saturday morning 25th September, about 11.30am that Fred was out with the stretcher squad, collecting wounded. They were returning to the dressing station with a wounded man, when Fred and another chap were shot by a German Sniper. Fred ‘got it’ in the back. The bullet penetrated his right lung and lodged there. The other chap got the bullet sideways through the head and died shortly afterwards. Fred was put on the motor ambulance and taken to some hospital further away from the firing line. We heard later that he had died later the next day, Sunday September 26th”.

The above is extract is taken from the book ‘ Buxton, Chelmorton, Harpur Hill, Peak Dale, King Sterndale and Wormhill Remembered by Keith Taylor.

Fred is also remembered on the New Mills War Memorial

http://www.stevelewis.me.uk/page14.php please visit this site for more details on the ‘Fallen’ of New Mills including Frederick.