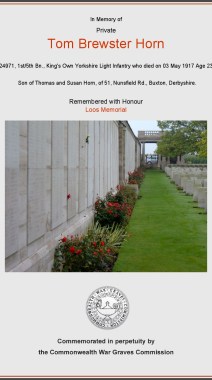 Tom Brewster Horn: The 1/5th Battalion, Kings Own Yorkshire Light Infantry was a unit of the Territorial Force with HQ in Doncaster, serving with 3rd West Riding Brigade, West Riding Division. When war broke out in August 1914, the units of the Division had just departed for their annual summer camp, they were at once recalled to their home base and mobilised at once for war service, moving to Doncaster. In November they moved to Gainsborough and in February 1915 to York to prepare for service overseas, those men who had not volunteered for Imperial Service transferred tp the newly formed 2/5th Battalion. They proceeded to France, from Folkestone landing at Boulogne on the 12th of April 1915 and the Division concentrated in the area around Estaires. On the 15th of May the formation was renamed 148th Brigade, 49th (West Riding) Division. Their first action was in the The Battle of Aubers Ridge in May 1915. In 1916 They were in action in the Battles of the Somme. In 1917 they were involved in the Operations on the Flanders Coast and the The Battle of Poelcapelle during the Third Battle of Ypres. – See more at: http://www.wartimememoriesproject.com/greatwar/allied/koyli5th-gw.php#sthash.Js5A0XX0.dpuf

1894: born 30th August 1894in Fairfield his parents were Thomas a Railway Guard & Susannah Brewster from whom Tom got his middle name. Tom was christened at St Peters on 21st October 1894.

Occupation: Working as an errand boy for an Ironmonger.