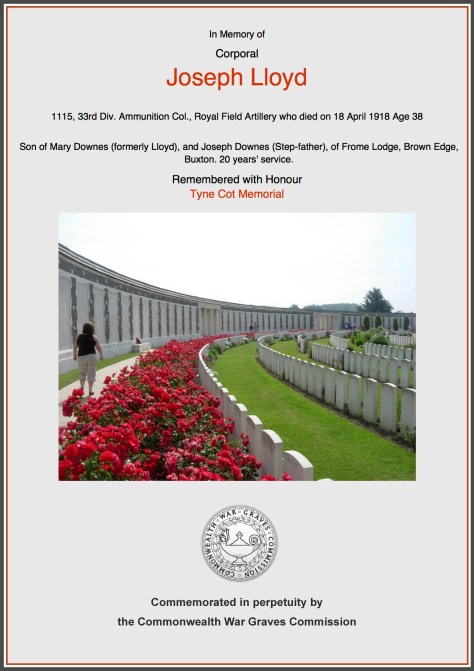 The above portrait is that of Corpl. Lloyd whose death in action we announced last week. He was a nephew og Ald. G Lloyd, of Wheatland Villas, Much Wenlock, and Mrs Lewis, of the Britannia Hotel Shrewsbury.

Born: abt 1880 in Much Wenlock, Salop.
Parents William & Mary Lloyd, Joseph’s father died when he was just 5yrs old, in the 1891 Census Joseph is living in Much Wenlock with his Grandmother. Joseph had 2 older brothers Richard & William and a younger sister Mary. Joseph’s mother re-married Joseph Downes from Buxton.
1901 Census: Joseph was already in the Army and was based at Shorncliffe Camp, Folkstone, Kent. Joseph’s Mother Mary & Step-father were living @ Frome Lodge, Brown Edge Lane, Buxton.

Military: Joseph had 20yrs Service in the Army including service in the 2nd Boer War
Memorial: Tyne Cot Panel 4 – 6 & 162.