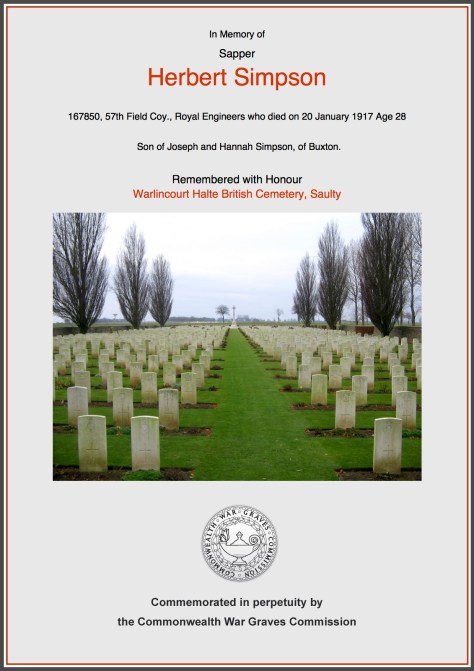 Herbert enlisted at Derby on the 5th February1916 and then transferred to the Royal Engineers, Herbert was sent to France on 13th December 1916 just over a month before he was died.

Herbert Simpson: 57th Field Company, The Royal Engineers served with 3rd Division during the Great War 1914-1918 1914-1918. 3rd Divsion proceeded to France in August 1914. They saw action in The Battle of Mons and the rearguard action at Solesmes, The Battle of Le Cateau, The Battle of the Marne, The Battle of the Aisne, at La Bassee, Messines and the First Battle of Ypres. They took part in the Winter Operations of 1914-15, and on the 7th of April 1915, 57th Field Coy, transferred to 49th (West Riding) Division. In 1916 they were in action in the Battles of the Somme. In 1917 they were involved in the Operations on the Flanders Coast and the The Battle of Poelcapelle during the Third Battle of Ypres – See more at: http://www.wartimememoriesproject.com/greatwar/allied/royalengineers57fldcoy-gw.php#sthash.g8KUWzHK.dpuf

Herbert’s name is on the Memorial.