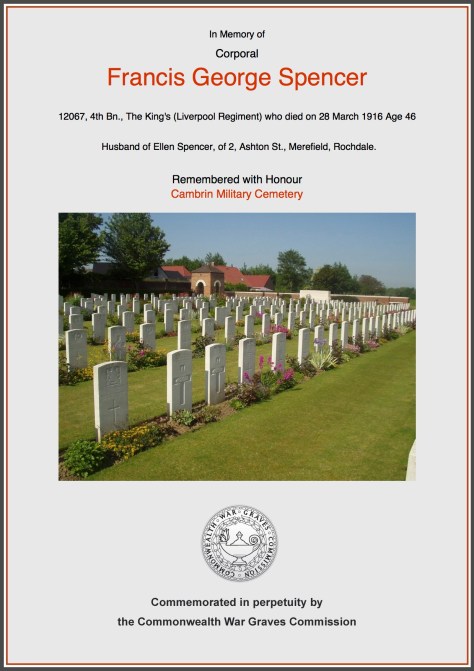 Francis is on the Buxton Lime Industry Memorial as before he went to War he was working at the Quarry in Dove Holes and had done so since he left school apart from his military service during the Boer War.

1881 Census: The family had moved to Harpur Hill and there was another baby brother Joseph. Francis started North Road School 17th April 1882 the family were living in Batham Gate, Francis left school on 29th June 1883 to work in Dove Holes.
Marriage: 3rd July 1897 Buxton, Francis married Ellen Wilshaw, at St John’s Church. Francis is not on the 1901 Census, as he was in the Army he would have been in South Africa fighting in The Boer War, with the 1st Battalion, The King’s (Liverpool Regiment). Ellen was living at 1 South View, Fairfield, with their daughter Violet, and her son Frank Wilshaw. Living at the same address was Frank’s widowed father Anthony.
1911 Census: Living 14 Hogshaw Villas with wife and 6 children.
Occupation: Stone Quarryman. The couple had five more children, Mabel, Nellie, Ethel, Edward Anthony and Bessie.
Service: King’s (Liverpool Regiment) 4th Battalion Corporal 12067
Memorial: Cambrin Military Cemetery Plot F 33.