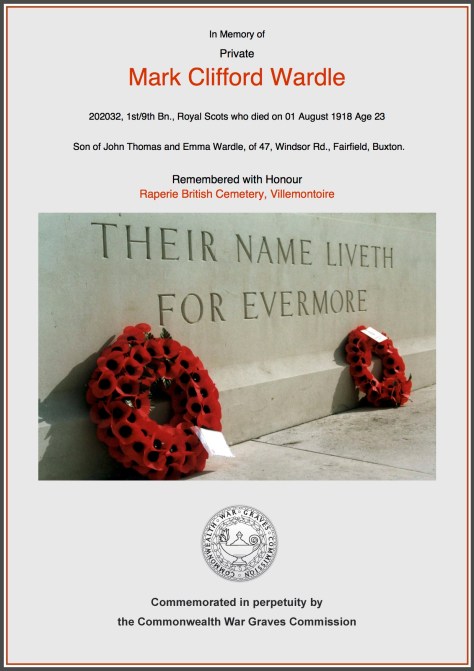 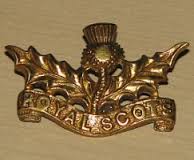 Mark Clifford Wardle: Highlanders) Battalion, The Royal Scots 1/9th (was a Territorial unit with HQ at 89 East Claremont Street, Edinburgh serving with the Lothian Brigade, Scottish Coast Defences. They proceeded to France on the 26th of February 1915 landing at Le Havre and joining 81st Brigade, 27th Division. They saw action at St Eloi and in The Second Battle of Ypres. On the 24th of November 1915 they transferred to 14th Brigade, 5th Division and on the 25th of January 1916 transferred to Third Army Troops. On the 1st of March 1916 they joined 154th Brigade, 51st (Highland) Division. they were in action in the Battles of the Somme, including the attacks on High Wood and The Battle of the Ancre, capturing Beaumont Hamel, taking more than 2000 prisoners. In 1917 They took part in the Arras Offensive, The Battle of Pilkem Ridge, The Battle of Menin Road Ridge and the Cambrai Operations. In February 1918 the British Army was reorganised and on the 6th the 1/9th Royal Scots transferred to 183rd Brigade, 61st (South Midland) Division. they were in action in The Battle of St Quentin and The Actions at the Somme Crossings they then returned to Flanders and were in action in The Battle of Estaires, The Battle of Hazebrouck and The Battle of Bethune. On the 1st of June 1918 they transferred to 46th Brigade, 15th (Scottish) Division. They were in action in Battle of the Soissonnais and the Ourcq taking part in the attack on Buzancy, and The Final Advance in Artois. – See more at: http://www.wartimememoriesproject.com/greatwar/allied/royalscots9-gw.php#sthash.kRRJK62m.dpuf

Born: 1895 Fairfield registered Chapel-en-le-Frith Vol 7b Page 839  Mark was born on the 28th May 1895, the only son of John Thomas and Emma Wardle, at 3 Cross Street, Buxton. Mark was baptised 14th July 1895 at St Peters Fairfield. His parents had married in O/N/D Qtr 1894, Mark had four half-brothers and sisters from his mother’s first marriage to Arthur Richards, Isaac, Ellen, May and Arthur. Clifford started North Road School on 7th November 1899.

1901 Census: Living at 3 Cross Street aged 6yrs.
1911 Census: Living @ 51 Windsor Road.
Occupation: Servant.
1916: Attested on 31st August after enlistment on 21st August 1916, he was living at 51 Windsor Road. Marks occupation was a Grocery Assistant. Before serving in France Mark had served in Ireland whilst there he was hospitalized with a Boil on his back. Mark also had 2 separate spells in hospital in Scotland, following his discharge in April 1918 he then went to France with his regiment, he was killed only 4 months later.