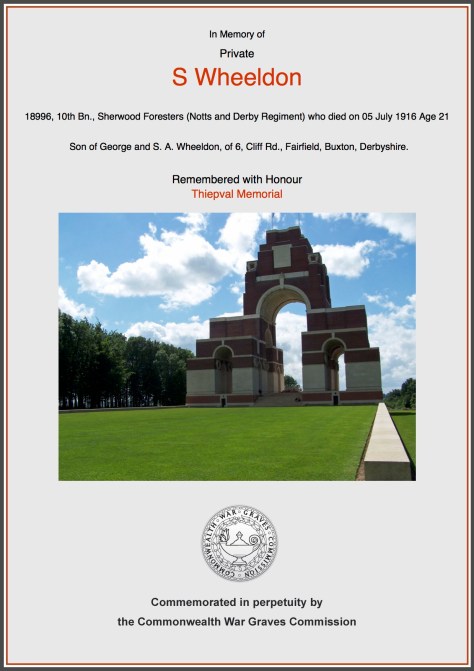 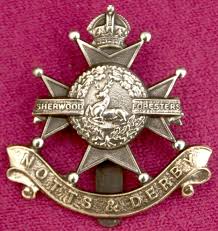 S Wheeldon: The 10th Battalion, Sherwood Foresters (Nottinghamshire and Derbyshire Regiment) was raised at Derby in September 1914 as part of Kitchener’s Second New Army and joined 51st Brigade in 17th (Northern) Division. After initial training close to home, they moved to Wool then to West Lulworth in October and back to to Wool in December. In June 1915 they Moved to Winchester for final training. The division had been selected for Home Defence duties, but this was reversed and they proceeded to France, landed at Boulogne on the 14th of July 1915, the division concentrated near St Omer. They moved into the Southern Ypres salient for trench familiarisation and then took over the the front lines in that area. In the spring of 1916 they were in action at the Bluff, south east of Ypres on the Comines canal then moved south to The Somme seeing action during The Battle of Albert in which the Division captured Fricourt and The Battle of Delville Wood. – See more at: http://www.wartimememoriesproject.com/greatwar/allied/sherwoodforesters10.php#sthash.2R954jp4.dpuf

Born: 1895 Buxton registered Chapel-en-le-Frith 7b 845 J/A/S, the son of George & Sarah Ann Wheeldon. Sam was baptised on 5th February 1896. (I have been unable to find Sam at North Road School however Gertrude attended the school).
1901 Census: Sam aged 5yrs living at 1 Alma Terrace with parents and younger brother John & younger sisters Gertrude & Pricilla.
1911 Census: Sam now has three more siblings Mabel, Leslie and May, the family are now living at 17 Onward Cottages, Fairfield. Sam was working as a “Caddie” at Fairfield Golf Club, this was an occupation for many of the young boy’s in Fairfield at the end of the 1800’s & beginning of the 1900’s.
Thiepval Memorial (Pier & Face 10c).