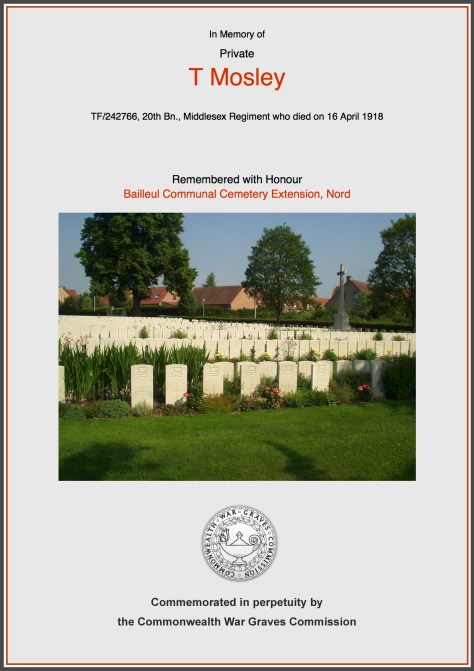 Tom Mosley: 20th (Shoreditch) Battalion, The Middlesex Regiment (Duke of Cambridge’s Own) was raised in Shoreditch on the 18th of May 1915 by the Mayor and Borough. In July 1915 they joined 118th Brigade in 39th Division and moved to Aldershot. In February 1916 they moved to Witley and transferred to 121st Brigade, 40th Division. They proceeded to France in June 1916 and the divison concentrated near Lillers. They went into the front line near Loos and were later in action in The Battle of the Ancre on the Somme. In 1917 they saw action during The German retreat to the Hindenburg Line, The capture of Fifteen Ravine, Villers Plouich, Beaucamp and La Vacquerie abd The Cambrai Operations, including the capture of Bourlon Wood in November. In 1918 they fought in The Battle of St Quentin and The Battle of Bapaume on the Somme then the The Battle of Estaires and The Battle of Hazebrouck in Flanders, suffering heavy losses – See more at: http://www.wartimememoriesproject.com/greatwar/allied/middlesexregiment20-gw.php#sthash.9x1XOTpE.dpuf

1914: Tom enlisted in Buxton into the 2/8th Battalion, Middlesex Regiment, on the 14th November 1914, on enlistment Tom gave his occupation as “Engine Cleaner” with the London and North-west Railway Company.

1918: The Mosley family were now living at 97 Fairfield Road.

The Buxton Advertiser 1st June 1918 in reporting Tom’s death said the following :- It will be with great regret that inhabitants will learn of the reported death in action of Pte Tom Mosley, son of Mr & Mrs Mosley of 97, Fairfield Road. After being reported missing for some weeks past further information  states the gallant young soldier has made the supreme sacrifice of his life. It is feared that the news must only too true, and will be much regretted by a large circle of relatives and friends in the town. The late Pte Tom Mosley who was 24 yrs of age, had been severely wounded on one occasion, and was over on ;leave about a year ago before joining his regiment (20th Battalion Middlesex). A very smart young fellow with a cheery word for everyone and popular wherever he went, his untimely loss in this terrible war will be deeply lamented. To his sorrowing parents and relatives much sympathy will be extended in the cruel blow that has befallen them. It is regrettable that the Roll of Honour at Fairfield is gaining lengthy dimensions.