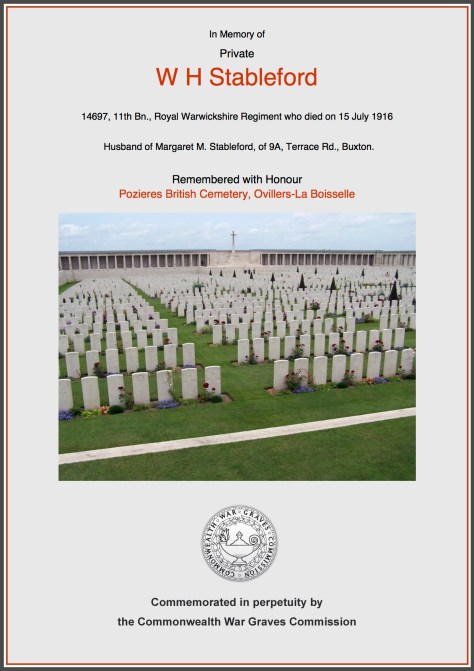 http://www.cwgc.org/find-war-dead/casualty/589587/STABLEFORD,%20W%20H  I visited the memorial in 2014 but was unable to locate his memorial in this or any of the surrounding Cemetery’s.

W H Stableford: 11th (Service) Battalion, The Royal Warwickshire Regiment was raised at Warwick in September 1914 as part of Kitchener’s Third New Army and joined 24th Division as army troops. The Division began to assemble in the area of Shoreham but suffered from a lack of equipment and a lack of trained officers and NCOs to command the volunteers. In April 1915 the 11th Warwicks transferred to 112th Brigade, 37th Division at Cholderton on Salisbury Plain and proceeded to France on the 30th of July, the division concentrating near Tilques. They went into action in The Battle of the Ancre. – See more at: http://www.wartimememoriesproject.com/greatwar/allied/warwickshirregiment11-gw.php#sthash.oSnX9APq.dpuf