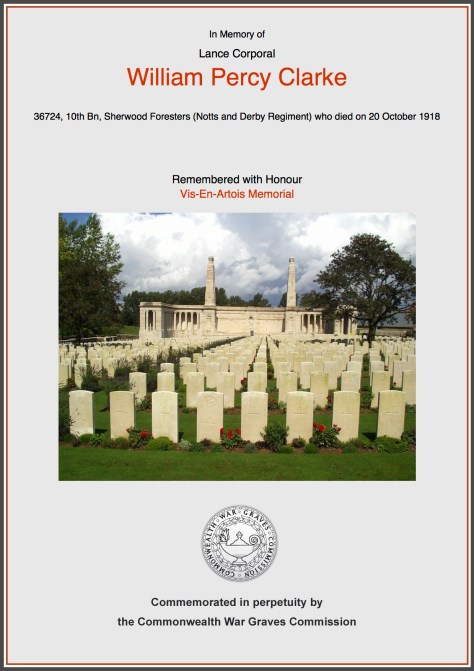 William Percy Clarke: The 10th Battalion, Sherwood Foresters (Nottinghamshire and Derbyshire Regiment) was raised at Derby in September 1914 as part of Kitchener’s Second New Army and joined 51st Brigade in 17th (Northern) Division. After initial training close to home, they moved to Wool then to West Lulworth in October and back to to Wool in December. In June 1915 they Moved to Winchester for final training. The division had been selected for Home Defence duties, but this was reversed and they proceeded to France, landed at Boulogne on the 14th of July 1915, the division concentrated near St Omer. They moved into the Southern Ypres salient for trench familiarisation and then took over the the front lines in that area. In the spring of 1916 they were in action at the Bluff, south east of Ypres on the Comines canal then moved south to The Somme seeing action during The Battle of Albert in which the Division captured Fricourt and The Battle of Delville Wood. In 1917 they moved to Arras and saw action in The First and Second Battles of the Scarpe and The Capture of Roeux. In late summer they moved to Flanders and fought in The First and Second Battles of Passchendaele. In 1918 they were in action in The Battle of St Quentin, The Battle of Bapaume, The Battle of Amiens, The Battle of Albert, The Battle of Bapaume, The Battle of Havrincourt, The Battle of Epehy and The Battle of Cambrai followed by The pursuit to the Selle, The Battle of the Selle and The Battle of the Sambre – See more at: http://www.wartimememoriesproject.com/greatwar/allied/sherwoodforesters10.php#sthash.re0RHx90.dpuf