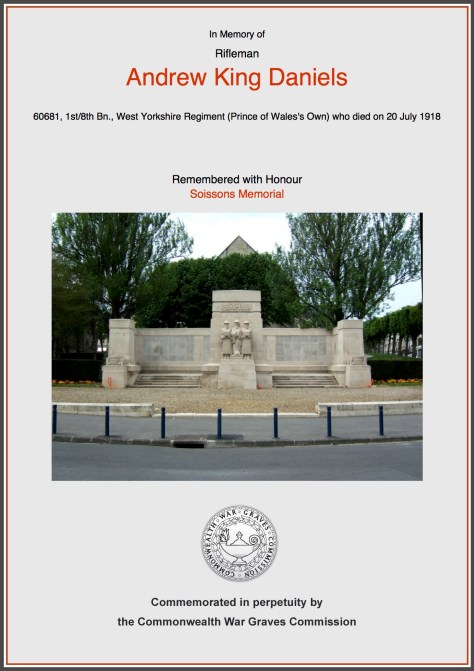 Andrew was the son of James Esplie Daniels who also died as a result of the war.

Andrew King Daniels: The 1/8th Battalion, (Leeds Rifles) West Yorkshire Regiment (Prince of Wales’s Own), a territorial battalion was at Carlton Barracks, Leeds in August 1914 when war broke out. On the 10th of August they moved to Selby, and end of the month to Strenshall, in late October they moved to York. In March 1915 they moved to Gainsborough before proceeding to France, sailing from Folkestone on the 15th of April 1915, landing at Boulogne with the 146th Brigade, 49th (West Riding) Division.
They served on the Western Front throughout the conflict, seeing action at Aubers Ridge, on the Somme, the Flanders Coast, the Third Battle of Ypres, the Battle of the Lys and the final advance in Picardy. On the 30th of January 1918 they absorbed the 2/8th Battalion and transferred to 185th Brigade, 62nd (2nd West Riding) Division
– See more at: http://www.wartimememoriesproject.com/greatwar/allied/westyorkshireregiment8.php#sthash.pzY3g9fO.dpuf