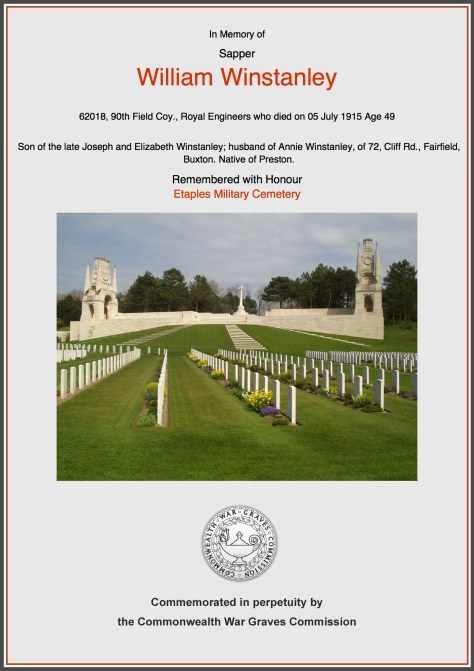 William Winstanley had enlisted into the 90th Field Company, Royal Engineers, the 90th  joined 9th (Scottish) Division in January 1915 at Bordon. They proceeded to France between the 9th and 12th of May 1915 and went into action in the The Battle of Loos. – See more at: http://www.wartimememoriesproject.com/greatwar/allied/royalengineers90fldcoy-gw.php#sthash.pRVW6kix.dpuf

William was born in 1880 at Birkdale, Southport, Lancashire the son of James & Elizabeth Winstanley (James his father is incorrectly named as Joseph on the CWWG Certificate). The family were living at 65 Chester Road, Preston.
1891 Census: Living @ 33 Dover Lane, Preston Aged 13yrs working as an Office Boy . William moved to Buxton at the end of the 1890’s
1900 saw Williams marriage to Annie Palfryman on the 16th May 1900 @ Buxton. Annie was a native of Biggin.
1901 Census: Living @ 33 New High Street, Fairfield. The couple had now had their first child William Turner Winstanley.
1911 Census: Living @ 33 New High Street. Fairfield. James & Annie now have 2 daughters Margaret (1903) & Isobel (1908). Williams occupation is as an Electric Wireman. William had been employed by W R Sanders & Company.

1915: William enlisted on the 6th January, in Buxton, following his enlistment wife Annie and the children moved to 72 Cliff Road, Fairfield. Williams records show he was 36yrs 6mths old on enlistment, he was a Proficient Electrician. He was quickly transferred to Chatham and following training embarked for France on 12th May 1915 arriving the following day, 13th May 1915 in under 2 months William had died on the 5th July 1915 after contracting Typhoid. In total William had served 181 days.