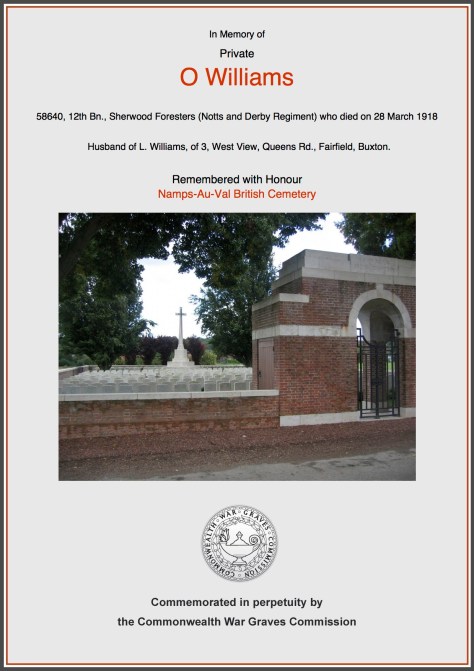 Owen Williams: Battalion Foresters (Nottinghamshire and Derbyshire Regiment), Sherwood The 12th was raised at Derby on the 1st of October 1914 as part of Kitchener’s Third New Army and joined 24th Division as army troops. They trained at Shoreham though the division suffered from a lack of equipment and a lack of trained officers and NCOs to command the volunteers. In April 1915 the 12th Sherwoods converted to be a Pioneer Battalion for same Division. In late June 1915 they moved to Aldershot for final training and they proceeded to France on the 29th of August. The Division concentrated in the area between Etaples and St Pol on the 4th September and a few days later marched across France into the reserve for the British assault at Loos, going into action on the 26th of September and suffering heavy losses. In 1916 they suffered in the German gas attack at Wulverghem and then moved to The Somme seeing action in The Battle of Delville Wood and The Battle of Guillemont. In 1917 they were in action at The Battle of Vimy Ridge in the Spring, The Battle of Messines in June and Third Battle of Ypres in October before moving south where they were in action during The Cambrai Operations when the Germans counter attacked. In 1918 they were in action on the Somme and The Battle of Cambrai and the Final Advance in Picardy. – See more at: http://www.wartimememoriesproject.com/greatwar/allied/sherwoodforesters12.php#sthash.xpqViG01.dpuf

Born: Owen was born at Glynucha, Langelynin, Caernarvonshire, Wales in the J/A/S 1885 Vol 11b Page 513. He was the son of William and Grace Elizabeth Williams.

1891 Census: Owen had an older brother, William John, a younger brother Robert Llewylyn and a younger sister Anne Mary.
1908:  Owen married Lois Norton at St James, Buxton on Christmas Eve. In 1909 the couple had a little girl Edith.
1911Census: Living Mainfields Bakewell aged 26yrs working as a Gardener by now they had another daughter Grace born in February.