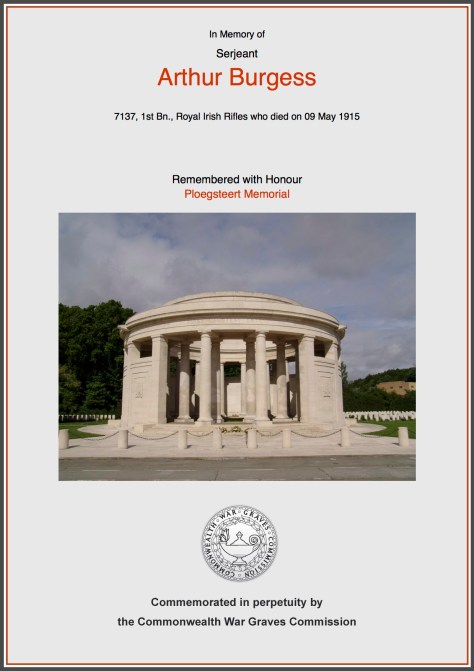 Arthur Burgess was already serving with the 1st Battalion The Royal Irish Rifles and they were in Aden at the out break of the Great War in August 1914. He had already seen service in Burma and the Andaman Islands. The Battalion embarked for Britain on the 27th of September 1914 and arrived at Liverpool on the 22nd of October they joined 25th Brigade, 8th Divison at Hursley Park, Winchester. The Battalion embarked on the 6th November 1914 landing at Le Havre a much needed reinforcement to the BEF and remained on the Western Front throughout the war. In 1915 they were in action at The Battle of Neuve Chapelle, The Battle of Aubers and The action of Bois Grenier. – See more at: http://www.wartimememoriesproject.com/greatwar/allied/royalirishrifles1.php#sthash.MU4DVEQ3.dpuf

1886: Arthur’s birth was registered Wilmslow Cheshire he was born on 22nd March 1886 . The family moved to Fairfield during the early 1890’s.
1894: Arthur started School at North Road School on 30th April, the family moved to Marlow Farm around this time just before the birth of his youngest brother Charles.

The family were living at 12 Marlow Street and Arthur was working as a Golf Caddy and had done so since he left School at the age of 12yrs. During 1901 Arthur’s father married for the second time to a local woman Elizabeth Whibberley.

Charles Burgess younger brother of both Arthur & Harry also served during WW1, Charles had served before WW1 with the Notts & derby regiment Pte 897, he then re-enlisted into the Territorials  on 28th May 1913 Pte 1946, he was wounded on 18th March 1917 but survived the war and was then living in Leicestershire with his wife Margaret & son Charles Sidney.