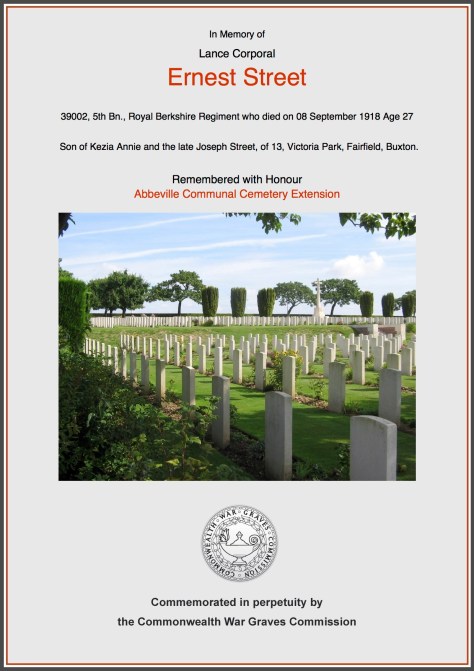 Death of Private E Street, Mrs Street of 13 Victoria Park has been bereaved of her son, Pte. Ernest Street, who has fallen gallantly serving his country in the war. This soldier was interred at the scene of Action. It was gratifying to the bereft mother to be allowed to attend the funeral which was of a very important character.

It must have been unusual for a Mother to attend the funeral of her son in France during the war even though it was nearing the end of the war! The home on Midland Terrace, Fairfield Road that Ernest left to go to War 2014

Ernest Street: The 5th (Service) Battalion, Royal Berkshire Regiment was a Kitchener Battalion, raised at Reading on the 25th August 1914. They underwent training at Shorncliffe, Folkestone and Malplaquet Barracks at Aldershot. They proceeded to France on the 31st of May 1915 and served with 35th Brigade in 12th (Eastern) Division on the Western Front. They underwent instruction withthe more experienced 48th (South Midland) Division and took over a section of the front line at Ploegsteert Wood on the 23rd of June 1915. They were in action in The Battle of Loos from the 30th of September, taking over the sector from Gun Trench to Hulluch Quarries consolidating the position, under heavy artillery fire. On the 8th they repelled a heavy German infantry attack and on the 13th took part in the Action of the Hohenzollern Redoubt, capturing Gun Trench and the south western face of the Hulluch Quarries. During this period at Loos, 117 officers and 3237 men of the Division were killed or wounded.By the 21st they moved to Fouquieres-les-Bethune for a short rest then returned to the front line at the Hohenzollern Redoubt until the 15th of November, when they went into reserve at Lillers. On the 9th of December, 9th Royal Fusiliers assisted in a round-up of spies and other suspicious characters in the streets of Bethune. On the 10th the Division took over the front line north of La Bassee canal at Givenchy. On the 19th of January they began a period of training in Open Warfare at Busnes, then moved back into into the front line at Loos on the 12th of February 1916. In June they moved to Flesselles and carried out a training exercise. They moved to Baizieux on the 30th June and went into the reserve at Hencourt and Millencourt by mid morning on the 1st of July. They relieved the 8th Division at Ovillers-la-Boisselle that night and attacked at 3.15 the following morning with mixed success. On the 7th they attacked again and despite suffering heavy casualties in the area of Mash Valley, they succeeded in capturing and holding the first and second lines close to Ovillers. They were withdrawn to Contay on the 9th July. They were in action in The Battle of Pozieres on the 3rd of August with a successful attack capturing 4th Avenue Trench and were engaged in heavy fighting until they were withdrawn on the 9th. They moved north and in 1917 were in action at Arras in The First Battle of the Scarpe, The Battle of Arleux and The Third Battle of the Scarpe. They remained in the Arras sector until the 30th of October when they moved to Hesdin for the Cambrai offensive in which the Division suffered heavy losses. On the 6th of February 1918 rhe 5th Berkshires transferred to 36th Brigade still with 12th (Eastern) Division. In March 1918 they moved by motor lorry from Busnes to Albert and were in action in The Battle of Bapaume and spent the spring engaged in heavy fighting a the enemy advanced across the old Somme battlefields. On the 1st of July 1918, they attacked Bouzincourt. but were repelled by the enemy. They were relieved on the 10th and moved to the area south of Amiens. They were in action in The Battle of Amiens and were engaged in heavy fighting from the 22nd pushing the enemy back and capturing Meaulte, Mametz, Carnoy, Hardecourt and Faviere Wood with in a week. In September they were in action in a successful attack on Nurlu and pursued the enemy back to Sorel Wood. They were in action during The battles of the Hindenburg Line, including The Battle of Epehy and The Battle of the St Quentin canal – See more at: http://www.wartimememoriesproject.com/greatwar/allied/berkshireregiment5-gw.php#sthash.dYwl6jwq.dpuf