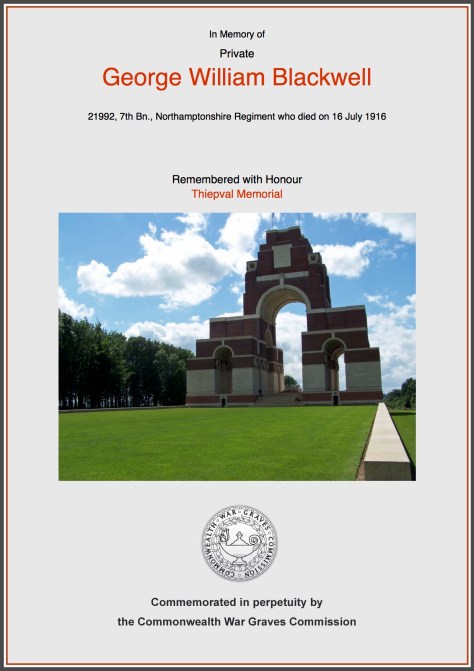 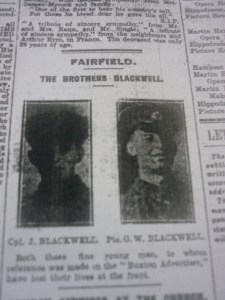 Service was firstly with the Middlesex Regiment. Service No: Pte 5808, Transferred to 7th Battalion Northamptonshire regiment Service No: 21992.

Obituary from The Buxton Advertiser

Pte. G W Blackwell
Mrs Blackwell, of 15, Fairfield Road, has now received official news from the War Office of the death of her son, Private G. W. Blackwell, of the 1st Garrison Company, North Hants Battalion. He was killed in action on July 16th. He had previously been wounded in France, being then attached to the 11th Middlesex Regiment, but after recovering from his wounds he was transferred to the 1st North Hants Garrison Company and was stationed in Egypt. After a while he was drafted back to France again, where he had only been one month. His other brother, Pte. J. Blackwell, 16th Sherwood Foresters, is also serving in the Great Push. George enlisted in the Middlesex Regiment on November 11th 1914, along with the late Private J. Rawlinson of Fairfield. With Mrs Blackwell and family the deepest sympathy will be felt. (‘Buxton Advertiser’ 2nd September 1916).