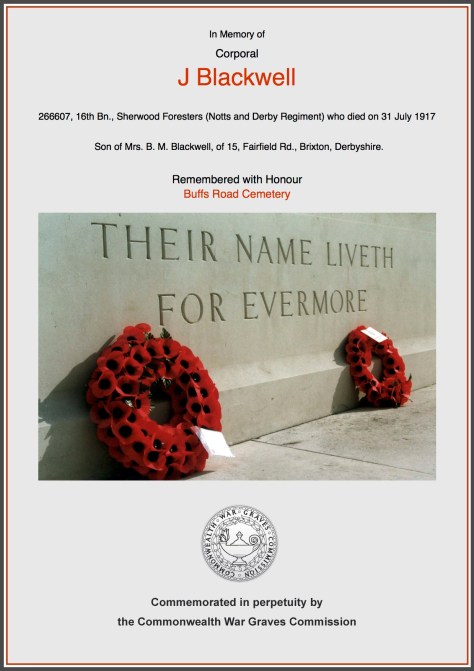 1915: Enlisted in 16th Battalion Notts & Derby Chatsworth Rifles aged 19yrs. The Service Papers show that he enlisted into the Sherwood Foresters (Notts and Derby Regiment) on 31st May 1915, at Buxton, where he was living at 15 Fairfield Road, aged 19 years 4 months.

John left Southampton for France on 6th March 1916, landing at Le Havre the same day.  John was promoted to Corporal on 6th May 1917 after just 2 months John was killed in action. In all he served 2 years 65 days.
Memorial: Buffs Road Cemetery Sp. Mem. 6

John Blackwell: The 16th (Chatsworth Rifles) Battalion, Sherwood Foresters (Nottinghamshire and Derbyshire Regiment) was raised at Derby on the 16th of April 1915, by the Duke of Devonshire and the Derbyshire Territorial Force Association. They moved to Buxton on the 4th of May and then on to Redmires near Sheffield on 8th of June. On the 2nd of September they moved to Hursley near Winchester to join 117th Brigade, 39th Division. They moved to Aldershot on the 30th of September and then to Witley for final training. In 1917 they fought in The Battle of Pilkem Ridge, The Battle of Langemarck, The Battle of the Menin Road Ridge, The Battle of Polygon Wood and The Second Battle of Passchendaele. – See more at: http://www.wartimememoriesproject.com/greatwar/allied/sherwoodforesters16.php#sthash.30SYAsBc.dpuf