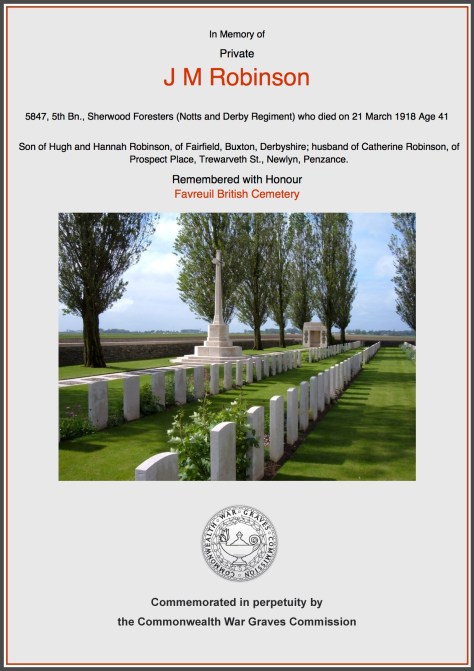 John is also commemorated on the following Memorials in Buxton

Brother of Hugh Robinson (who died just over a month before John).
Born: 14th April 1876 in Hawksworth, Nottinghamshire. John started North Road School on 31st March 1884 (the same day as George Goodwin who also died during WW1)  he was the oldest son of Hugh Robinson Snr a local man from Chelmorton & Hannah who came from Hawksworth where John himself was born. When John was just 12 yrs old his father Hugh Snr a farmer of 50 acres at Waterswallows, Fairfield  died. John was only at school for 4yrs leaving on 11th June 1888 to start work. John left school at the same time as his father died, perhaps the family needed his wages.
1891 Census:  Following Hugh Seniors death his mother kept a Boarding House and the 1891 Census shows Mother Hannah a Widow and Boardinghouse Keeper living @ Rock Villa’s, Fairfield Road. The house was named Ivyleigh . The 1901 Census John aged 24yrs is living @ Ivyliegh, Fairfield Rd. John’s occupation was a Merchant Car Man. In 1903 John married Catherine Wearne in Penzance, Cornwall and in 1911 the couple were living on St James Street, Buxton with John aged 34yrs working as a Carter for a Wine Merchant. They had 2 children William aged 6yrs and Elsie 17mths old. During the War Catherine & the children moved to Bennett Street. John enlisted in Buxton, his name as well as being on the Fairfield Memorial & The Slopes is also commemorated on The Bennett Street Memorial as well as in St John’s and St Mary’s Churches.th Mother a Widow @ Rock Villa’s (she was a Lodging House-Keeper).
Service Details: Enlisted around the beginning of 1916 into 5th Battalion Sherwood Foresters Pte 5847, he was transferred to Durham Light Infantry Pte 63609 before finally being transferred to Pte 21377 Labour Corps.
Memorial: 11.E.41 Favreuil British Cemetery