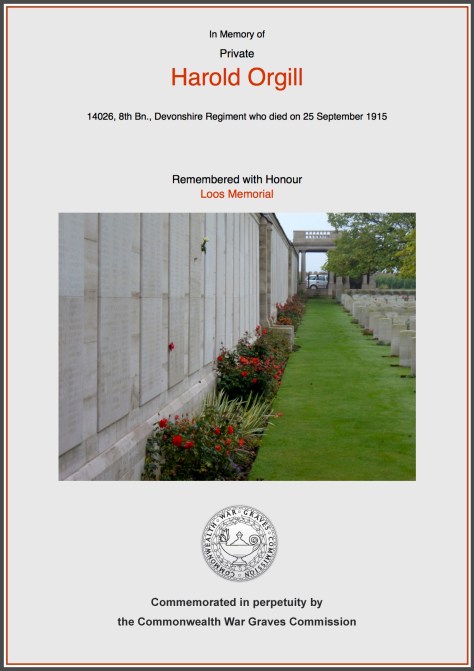 Report in the Buxton Advertiser of Harolds death 2nd September 1916. News has been received by the War Office by Mr & Mrs George Orgill, of 18 Ash Terrace, that their son has fallen in action. Originall reported missing after the great attack at Loos, about 12 months ago, there seems to be no doubt now that he has bravely laid down his life.  Pte Orgill had served for no less than eighteen years in His magestys Navy, but on the outbreak of war was transferred to the Army, much sympathy is offered to his bereaved parents, and his wife and two children, who are at present residing in Plymouth.

Harold Orgill: 8th (Service) Battalion, The Devonshire Regiment was raised at Exeter on the 19th of August 1914 as part of Kitchener’s First New Army and joined 14th (Light) Division as Divisional Troops. In May 1915 they left the Division, having completed training, but a lack of ammunition delayed them and it was not until the 26th of July that they proceeded to France, landing at Le Havre. On the 4th of August 1915 they joined 20th Brigade, 7th Division. They were in action in The Battle of Loos. – See more at: http://www.wartimememoriesproject.com/greatwar/allied/devonshirergt8-gw.php#sthash.c0wO0Jd7.dpuf

Born: Harold was born on the 21st December 1880, at 7 Tor Street, Buxton, the son of George and Emma Orgill. He had an older sister Florence & an older brother William.
1891 Census: Aged 10yrs living with parents (Dad George) in Gorton. Manchester. I am unsure when the family returned to Buxton and there is only one brief record of any of the Orgill children being at North Road School, that being Herbert who attended school from 4th October 1897 – 24th November 1897.
1901 Census: Royal Naval Barracks. Stoke, Devonport. (Dad George living at 18 Ash terrace, Fairfield).

Harold had served for 18 years in the Royal Navy. His Service Record shows that he was employed in as a domestic, until early 1907, when he became an Officers Steward. A large proportion of his service was spent at H.M.S. Vivid 1 which was the name given for the Navy’s shore base at Plymouth. His service saw him deployed to a number of ships, usually for short periods.
1907: On the 6th January Harold married Ethel Louise Dyer.
1911 Census: Living in Devonport. Married. Occupation Officers Steward. Royal Navy.
At the outbreak of War in 1914 Harold had just returned to HMS Vivid after 5 days on HMS Eclipse, the lead ship of her class of cruisers.

On the 3rd October he was posted again to HMS Tiger, a battle cruiser, launched in 1913. Tiger was the most heavily armoured battle cruiser of the Royal Navy at the start of the First World War

Harold’s character had always been reported as very good, but after just 8 days on HMS Tiger his Record was changed to Unreliable, Dishonest & Inefficient & he was discharged to shore, with his last entry being ‘services no longer required’.

WW1 Enlisted in Devonport into the Army, his Medal Index Card shows that he entered France with his Battalion on the 25th July 1915, however his Service papers are no longer available.