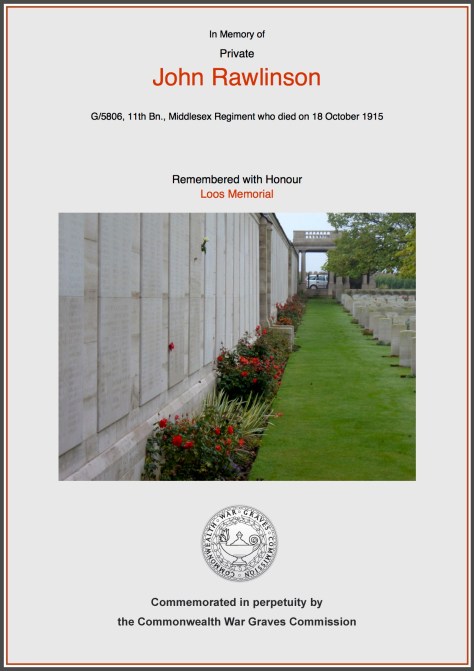 John was killed 18 days after Pte John Stenson during the fighting at Loos. They had enlisted into the Middlesex Regiment not far apart, John Rawlinson Pte 5806 & Pte John Stenson 6417. The boy’s lived near to each other and are remembered on the same panel at the Dud Corner Memorial, remembered also at Dud Corner Cemetery are Pte Tom Brewster Horn and Pte Harold Orgill.

John Rawlinson: 11th Battalion, The Middlesex Regiment (Duke of Cambridge’s Own) was raised at Mill Hill in August 1914 as part of Kitchener’s First New Army and joined 36th Brigade, 12th (Eastern) Division. They trained at Colchester moving to Shorncliffe in November and in February 1915 they moved into Ramillies Barracks at Aldershot for final training. The Divison proceeded to France between the 29th of May and 1st of June 1915 landing at Boulogne, they concentrated near St Omer and by 6th of June were in the Meteren-Steenwerck area with Divisional HQ being established at Nieppe. They underwent instruction from the more experienced 48th (South Midland) Division and took over a section of the front line at Ploegsteert Wood on the 23rd of June 1915. They were in action in The Battle of Loos from the 30th of September, taking over the sector from Gun Trench to Hulluch Quarries consolidating the position, under heavy artillery fire. On the 8th they repelled a heavy German infantry attack and on the 13th took part in the Action of the Hohenzollern Redoubt, capturing Gun Trench and the south western face of the Hulluch Quarries. During this period at Loos, 117 officers and 3237 men of the Division were killed or wounded. – See more at: http://www.wartimememoriesproject.com/greatwar/allied/middlesexregiment11-gw.php#sthash.3viJQOVV.dpuf

Report of Johns death from Buxton Advertiser 23rd October 1915. The sad news that Pte John Rawlinson of 86 Nunsfield road, Fairfield has been killed at the front arrived yesterday (friday) morning, and Mr & Mrs Rawlinson and  family received many expressions of sympathy in the great loss they are called upon to bear. Pte Rawlinson was one of the best known young men in Fairfield, and was a general favorite at the Fairfield Mens Own. He will be greatly missed for he was a regular attender at the Sunday morning meetings. deceased was also a member of the Fairfield cricket Club and an enthusiastic devotee of the summer pastime. Pte Rawlinsons regiment was the 11th Middlesex, in which he enlisted last November. He proceeded to France in May, and has been engaged in recent fighting. he was 20yrs of age, and prior to answering the great call was engaged as a stoker at the locomotive shed, and had just passed as a fireman. The news of his death was conveyed in a letter from a friend of his Pte T Elliott, and this reads ” Dear Mr Rawlinson It is with deepest sympathy that that I write to inform you of Jacks death, he was killed by an areal torpedo yesterday. It may console you a little to know that he died instantly. I could not write this to his mother because I know what a terrible shock it will be to her. For your own sake, I know you will break the news gently. Never before have I felt so sick at heart, his death has taken it out of me. Perhaps you know whereabouts we are Jack has been placed amongst thousands of others waiting to be buried, which I hope and trust will be soon. It is not fighting here but terrible massacre hand to hand ….. I will close now with deep and sincere sympathy to you and the family”. “P.S, May God bless and comfort you in your loss”.

1914: Enlisted at Buxton there are no Service papers for John.